CanadianAngling.com (Nov. 8, 2011) Lately we have been following the story of what has been happening to the bat population in southern Ontario and the USA. We noted that we hardly saw any bats this summer around their normal flight locations. Recently the U.S. Geological Survey scientists and their partners’ found the cause of the white nosed syndrome in bats. They found that a fungus named Geomyces destructans is the cause and they published their research in Nature. This is the first direct proof that this fungus is the cause of the massive die off of the bats.

Anne Kinsinger (USGS Associate Director of Ecosystems ) said: “By identifying what causes WNS, this study will greatly enhance the ability of decision makers to develop management strategies to preserve vulnerable bat populations and the ecosystem services that they provide in the U.S. and Canada.”

Their study found that by exposing brown bats to G. destructans during their hibernation cycle, 100% of the healthy bats developed the disease. They also noted that this disease can be spread from one bat to another. David Blehert, (USGS microbiologist and an author of the study) stated that: “While our study confirmed that G. destructans is spread bat-to-bat, it is also important to note that virtually all pathogens, especially spore-producing fungi, are spread by multiple routes. This is the reason that in an effort to further control the spread of White Nosed Syndrome, resource management agencies have implemented universal precautions, including limiting human access to sensitive environments occupied by bats, decontaminating equipment and clothing moved between these environments, and restricting the movement of equipment between sites.”

As we have stated in previous articles on our website, the insect eating bats save the agricultural industry billions of dollars in North America every year and are invaluable in pest control. Bat populations are declining at an alarming rate through North America since this was first seen in 1996 in New York State. It has spread into 4 provinces and 16 US states. Some populations have declined 80% in the North-eastern US.

The study was done by scientists from the following: USGS, University of Wisconsin-Madison, Wisconsin Veterinary Diagnostic Laboratory, University of Tennessee-Knoxville, New York Department of Environmental Conservation, the U.S. Fish and Wildlife Service, Wisconsin Department of Natural Resources, and Bucknell University.
Also se our orignal article on the front page.
The latest research on this has shown that the fungus probably originated in a cave in Europe and was transferred to north america by researchers or explorers of bats or caves. A couple of weeks ago my neighbour found one small brown bat trapped in the hallway and she contacted me imediately. We were able to recue the bat and it was seen feeding later in the day. here are a couple of pictures of the rescue. 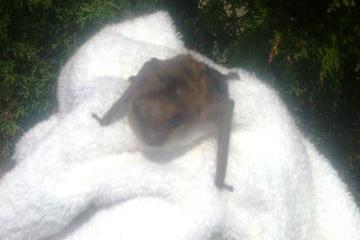 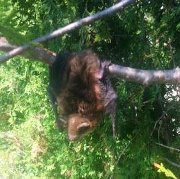