Canadian Angling.com (February 5, 2012). One of the most elusive species in North America is the flying squirrel. While their name suggests that they can fly, the flying squirrel actually glides through the air. You can see the rest of its family daily eating and climbing about, but you rarely see the flying squirrel. They are strictly a nocturnal species that searches for food during the night. There are two subspecies, the larger Northern and the smaller Southern flying squirrel. There are different distinct subspecies spread out through North America and some are endangered like the Virginia Northern flying squirrel.
They have a light brown fur on their upper body and a furry membrane (a lose flap of skin) called a patagium. This membrane is what allows it to glide from location to location. The membrane goes from the front and back leg and is grayish with white on the underside. The membrane kind of works like a parachute and traps air underneath the membrane, allowing it to glide. They use their tail and membrane to turn while they glide. Because they are nocturnal, they have large eyes adapted for night vision, flat tails and long whiskers, which are normal for nocturnal species. They also have some webbing between their toes.
Their main food is nuts, mushrooms, fungi, tree sap, insects, and seeds. They locate most of their food by using their nose. In urban areas, they visit bird feeding stations but they are rarely seen since it is after dust. They also use their memory to find food where they have found it in the past. They store their food like their squirrel cousin in trees, squirrel nests, etc to eat when food supplies are low. To navigate through the forest, they use scent glands on their cheeks to mark their routes.
They build their nests in trees, like their cousins, and also outside leafy nests that we can see in the trees. When rearing their young, they move them from nest to nest frequently. They also share their nests but most of the nests usually have 2-5 members. Sharing nests is extremely important during the winter months as this helps maintain their body temperatures. One interesting fact is that flying squirrels do not hibernate in the winter months and are active all year long except during extreme weather. One litter is produced per year. Mating occurring in late March and the litter produced 42 days later, with a litter size of 2-4 young.
One of the amazing things that the flying squirrel does is that it glides from location to location. This is usually around 17 meters with the longest glide seen was 45 meters. The female glides a shorter distance than the male, about 5 meters less. An interesting fact is that when the flying squirrel lands, it will quickly move to the opposite side of the tree. This is a defense mechanism against predators that spot them and may be chasing them.
The flying squirrel is normally brown on its back, and white on both its belly and the bottom side of its furry membrane. The northern flying squirrel equals in size to a red squirrel, and the southern species is comparable to a chipmunk. Nocturnal mammals, they have large, dark, bulging eyes that are well adapted for night vision. They also has something called “feelers,” which are sensitive whiskers used to make nocturnal travel easier.
The picture below was photographed in Oliphant Ontario and is courtesy of James Detzler and copyrighted. 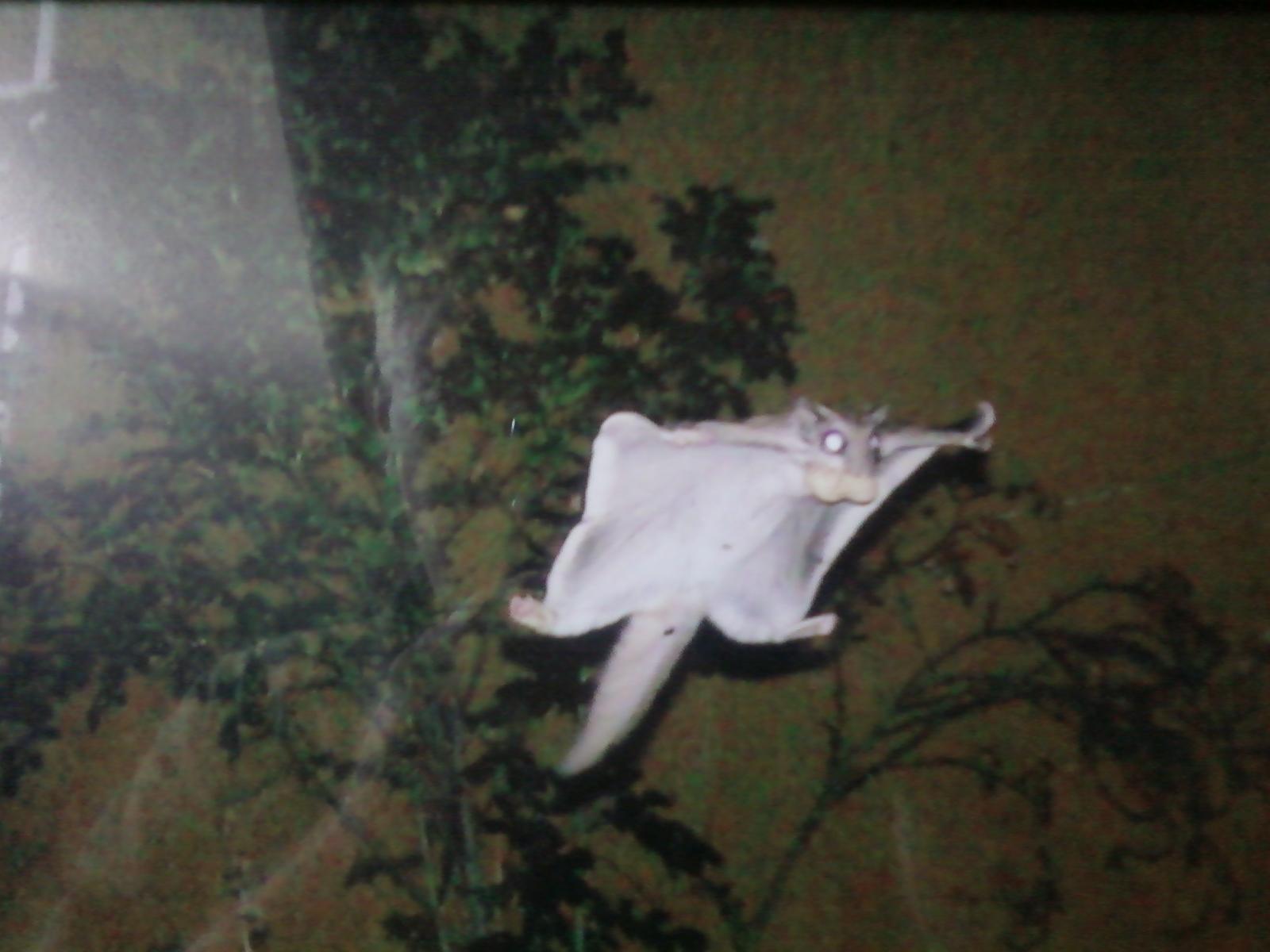